Antenna lighting
Okay, in my thoughts of lighting up my LT like a UFO, I conjured up the idea of lights running the length of the antennas.

While I'm sure it's not an original idea, I've never seen it done on thin motorcycle antennas, such as the LT's. I've got both antennas, and I thought that'd be a really neat way to add some more visibility at night. Should look

The problem is the small diameter of the antenna, leaving practically nothing to adhere to. I was thinking something along the lines of these LED light strips, but hopefully thinner/narrower.

One of my co-workers suggested, half kidding, to hang a couple of chem-lights on them, but I'm guessing that would look kinda ghetto/red-necky

I suppose if I could find them connected on a strand, kinda like Christmas lights, then I could wrap them around the length of the antenna, but then it'd probably look retarded during the day.

So, question is, suggestions anyone?

Join Date: Oct 2011
Location: Cave Creek, AZ, USA
Posts: 795
Re: Antenna lighting
Where else are you planning yo put lights? Next time I take the old beast apart for routine maintenance I am going to light her up with LEDs.

So far the places that I have decided I will put them are:
1. Behind the radiator grills so there is a glow coming out of the radiator exhaust ports
2. provide a glow out the openings to the engine block in the lower fairing
3. Of course under the bike to provide a glow cushion
4. If I can manage to fit them - under the front fender (maybe)
5. In that gap between the trunk and side cases
6. One each side in the wind deflectors (the adjustable ones underneath the mirrors)
7. Another poster recently posted his addition of running lights in the turn signals, definitely doing that just for safety (at least that's my excuse).

As for the antenna I don't have an answer for that, I have seen goldwings with light-up antennae but I think that you can buy antennae for the GW with lights in them.
-Steve

Steve, I'm not so sure about the front fender. The '99 has a simpler design, but there might be somewhere to mount an LED string. I really like your idea of illuminating the radiator area. What about the front cowl for the oil cooler? The radiator exhausts should be easy enough. Mine has some floor/foot boards, so I was thinking of outlining them w/ some amber LEDS/string lighting, or maybe just stick something on the bottom side for that glowing affect of yours. I think I just realized what you're talking about re: the area between the trunk case and side cases. That'd be cool, too.

I have a ZZ trailer, so naturally, that's gotta have something. Depending how much gap, if any, there where the lid closes, maybe I can provide some illumination through the gap with the effect of a thin line of light going around the trailer. Can definitely illuminate the fenders on the trailer. Maybe a string on the trailer's tongue? There's also the little cooler mounted in front of the trailer- perhaps a thin string outlining the base of it? I thought about mounting a couple of motorized rotational spot lights on top of it, but that'll probably remain in the concept stage.

BTW, there is at least one thread on this forum where someone has managed to illuminate the wind deflectors by attaching a light to the end in such a way where it glows around the edges, I think. Same concept of fiber optics, where the light travels inside of the strands. I haven't seen how the successful of achieving the desired results. Also costly, if those things break in process.

The turn signal mirrors are cool. I can't remember if I've already bought some, but I have seen some inexpensive alternatives to the several hundred dollar ones.

We'll have to post some pics once we're done.
Jeff
Big D is my neck of the woods

Join Date: May 2011
Location: Garland
Posts: 1,079
Re: Antenna lighting
Doug, visualize a long blade of grass or some other similar leaf where the dew is forming droplets along the length of the blade, but not falling off. I know I've seen several shots like this in the various nature shows/books.

I'd like to achieve the same effect with the antennas.
Jeff
Big D is my neck of the woods

Join Date: Jul 2003
Location: Alpharetta, GA, USA
Posts: 1,154
Re: Antenna lighting
I'm just throwing this out there to give you some ideas. How about using a fiber optic line?

Pros - it's very thin so it would conceal nicely during the day and depending on what model you get, the light color can be changed.

Join Date: May 2011
Location: Garland
Posts: 1,079
Re: Antenna lighting
Yes, Greg I'm considering something like that. I think I found some that's shorter and battery powered.

I also found some "fairy" lights

Join Date: Sep 2005
Location: Rushville, OH, USA
Posts: 7,772
Re: Antenna lighting
If you're going the fiber optic route, consider doing something (I have no idea how you would do this) that results in a constantly-changing, undulating color change. In nature, the cuttlefish does this so quickly and smoothly that it looks totally unnatural. This photo doesn't do it justice but I'm sure you can find videos on Youtube or elsewhere.

You'd definitely be unique. Not my cup of tea, but you did ask for suggestions.

In this video you'll see what I'm referring to - at 0:17. Good luck with your project. 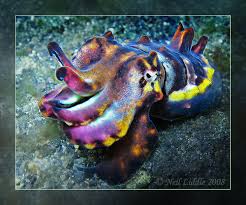 Join Date: May 2011
Location: Garland
Posts: 1,079
Re: Antenna lighting
Thanks for the link Howard. That is a very neat video.
I've always found marine life to be the most intriguing and unusual of creatures.

That thought had crossed my mind, but like you say, it's figuring out how to do it, at least w/ a single strain/string. Sounds like an opportunity there somewhere.

Join Date: Jul 2002
Location: Tucson, AZ, USA
Posts: 3,522
Re: Antenna lighting
If you place any metal near the antennas their performance will degrade. If one of the antennas is used for transmitting the wire will be coupled with the antenna. Coupling will alter the VSWR and energy will be added to the circuit of whatever is illuminating.

Best from Tucson
Bob
"He was a foul caricature of himself, a man with no soul, no inner convictions, with the integrity of a hyena, and the style of a poison toad." H. S. Thompson
BecketMa is offline
Quote Quick Reply