Join Date: May 2004
Location: Hazel Green, AL, USA
Posts: 13,628
No Drop Plate in Your Lift - Try This.
I have a nice older Handy Electric lift but it has no drop plate. I have a Bushtec hitch and have to remove it every time I change a rear tire (on # 11 now). So after careful consideration and all the points made by hschiler on his lift accident. I thought I would give this a try. I would only do this on a Handy or Handy wanna be. Not a Harbor Fright (yes I spelled it the way I meant).

This does put the mass quite far back on the lift and you must be very careful. But it worked quite well and was stable. I did have to raise it a bit to get the wheel to clear but not very far. I saw no evidence of the lift tipping back during the lift despite the improper load.

I raised the ramp and supported it with 2 x 10s. Rolled it back until the center stand would hit about a foot from the end of the lift. Then strapped the CS to the front tire and the tire to the lift and removed the ramp.

Join Date: Sep 2005
Location: Rushville, OH, USA
Posts: 7,778
Re: No Drop Plate in Your Lift - Try This.
Interesting. That would work, but as you mention I would be concerned about the weight being positioned so far to the rear of the lift. On some other (lighter) lifts, one might want to consider devising a way to fix/strap the front of the lift to the floor.

Also: Glad my recent hard-earned lesson could give someone else a reason to think about safety.

On a related note: When I bought my lift a few years ago I also got one of these. I use it when removing the front wheel. Now that I have a hitch on the LT, I use the jack when changing the rear tire, also. The hitch interferes a little with removal of the rear wheel (even with my hitch's drop tail section), so I use the jack to get a couple inches of clearance. 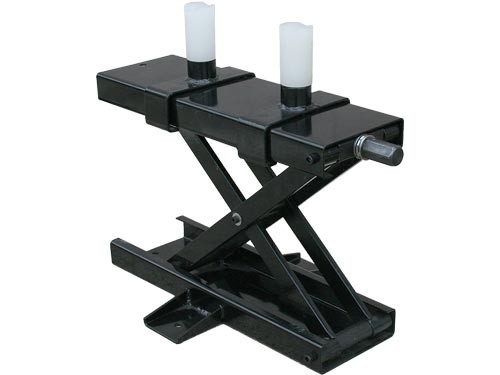